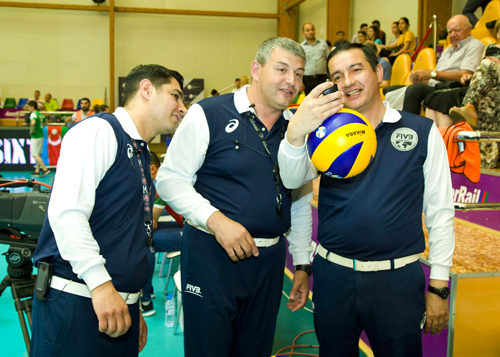 The development of volleyball in the Republic of Azerbaijan is rich in historical facts. Thus, in parallel with the training of coaches, high-level athletes, great work has been done in recent years to train experienced national volleyball referees, who are recognized at the international level, and today this work continues successfully.

In the same years, as mentioned above, at the same time in our country were trained by skilled and educated volleyball referees. They were awarded the highest marks by participating in the USSR volleyball championships, international and all-Union competitions as a judge. As a result of the development of volleyball in our country at this level, "Baku Volleyball School" has a special position in the world of volleyball in the former USSR.

The school of volleyball referees in the Republic of Azerbaijan was founded in 1950-1960 by Ivan Grigoryevich Diyackov and Shamil Rzayev, one of the well-known volleyball specialists of that time.

As the first Azerbaijani volleyball referee, Ramiz Samadov, who was awarded the title of the first international referee, successfully represented our native Azerbaijan at the Olympic Games, international competitions at the World and European Championships and the USSR Premier League for many years.

Judge Ramzi Yusifov was considered one of the strongest and most capable judges in the former USSR. Yusifov Ramzi was confirmed as one of the 10 strongest volleyball referees of the year in the USSR eight times in a row in 1968-1975. Vagif Aliyev, a young all-union referee representing Azerbaijan, was entrusted to officiate the first opening match of volleyball competitions at the 1979 USSR Spartakiad as the first referee. Ravil Samadov from Azerbaijan and our All-Union judges Vagif Aliyev, Rafig Rasulov, Oktay Musayev, Raisa Zelepukhina, Nona Ismayilova, Anzor Gusov and Rafig Agayev, who were awarded the title of the second international judge from Azerbaijan, also judged the former USSR championships in 1970-1980.

During these years, the country has always carried out planned activities in the field of training young volleyball referees, including training courses, training seminars and other similar events. As a result of this work, our country has managed to train a large number of talented young volleyball referees not only in the capital Baku, but also in other cities and regions. As a result of the constant care, attention and direct assistance of the country's leadership in the development of volleyball in the post-independence years of the Republic of Azerbaijan, especially national leader Heydar Aliyev and his successor, President of the National Olympic Committee Ilham Aliyev, not only domestic but also international sports has achieved brighter achievements in the world.

The Azerbaijan Volleyball Federation (AVF), which has been revived and renewed since 2002, works tirelessly to train high-level specialists, athletes and referees for the mass development of volleyball in our country and achieves higher results every year. One of these successes is the continuous work on training international judges in our country.

Eldar Zulfugarov, Eldar Aliyev, Selin Konstantin and Zaur Hajiyev, who have more experience than these referees, are highly valued by the International Volleyball Federation and the European Volleyball Confederation and are invited to referee in the most responsible competitions.

As a result of the activities of the AVF Judges' Board over the years, the number of referees currently serving volleyball competitions of various levels in our country has reached 70 people. Including:
Judges of the republican rank -22 people
I degree judges - 20 people
Young judges - 21 people In recent years, the work of our judges, who have served in international competitions in the Republic of Azerbaijan, including the I European Games, IV Islamic Games, official international tournaments, has always been highly praised.